I received these cards from my penpal Beverley from Tasmania. She sent me the cards with her last parcel, so there are no stamps on them. 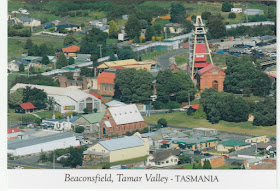 Beaconsfield is an old mining town situated in the Tamar Valley in northern Tasmania. It was formerly knows as "Brandy Creek" because of the color of the water in the creek where gold was originally discovered, but was renamed in March 1879 after Lord Beaconsfield. 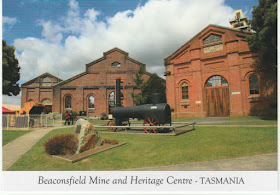 Gold was first discovered in the Beaconsfields area in 1847. Gold was minds at Beaconsfield from 1877 to 1914 and during some of this time contributed 47,72 % of the states total gold production Mining recommenced at Beaconsfield in 1999 and ceased on 30 June 2012. 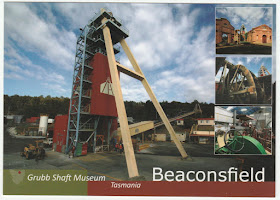 The Grubb Shaft at Beaconsfield is the largest working gold mine in Tasmania and was the site of the Beaconsfield Mine collapse on April 26 2006. The adjacent museum tells the story of the mine's boom years between 1877 and 1914. 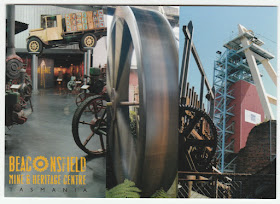